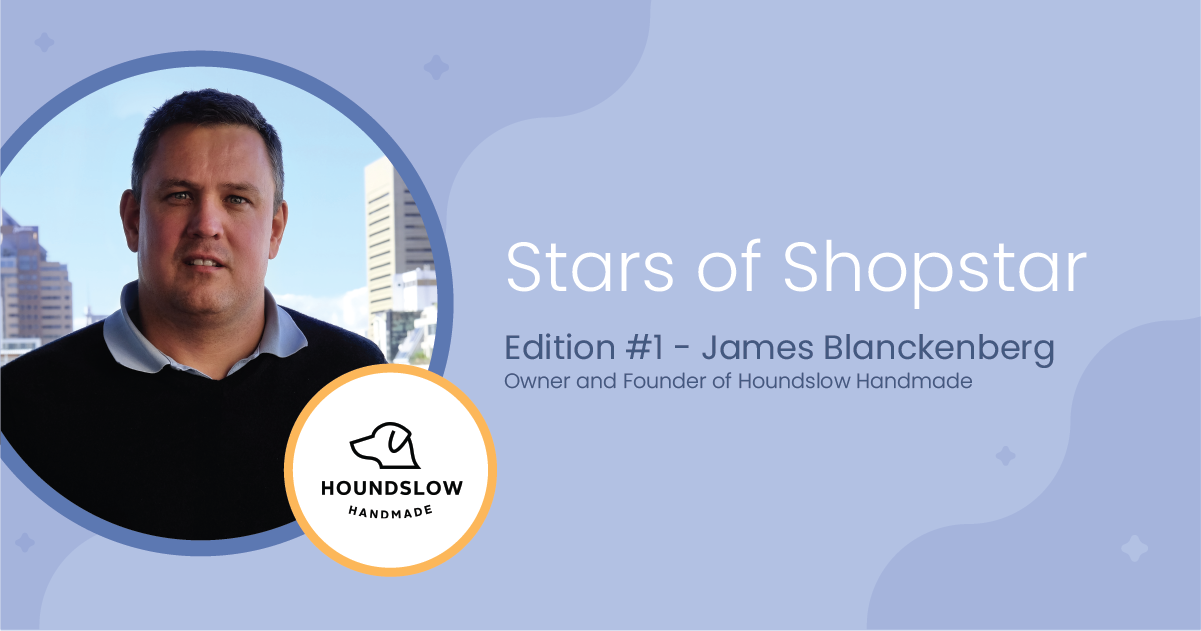 How being hands-on and having an enquiring mind got a Shopstar store owner smiling again.

‍
For our first-ever Stars of Shopstar feature, we caught up with Houndslow Handmade founder James Blanckenberg to find out what it takes to move from the corporate world to starting a business and being the captain of your own online shop.

Change is daunting at the best of times. Let alone when you have a young family, you’re established in your career and, generally speaking, doing quite well for yourself.

But surface-level success isn’t always equal true satisfaction. Especially when the corporate grind is getting you down.

“My background’s in IT. I’ve had a long career as an information architect, mostly in retail, but I’ve never felt totally at home in the corporate world. The politics, games and poker faces... I’m still involved a bit, I need to do another contract or two. But the end is in sight!”‍

James is adventurous and creative.

He loves the outdoors. Which makes living in South Africa quite convenient. He’s happiest in his workshop or his studio, working with his hands, tinkering, making and building things. That is, of course, when he’s not hunting, fishing or otherwise enjoying being out in nature with friends and family.

Although certain elements of James’s corporate job were satisfying, sitting in an office and staring at a computer screen just isn’t what he wants to be doing on a daily basis.

“I’ve got an enquiring mind. I love to learn and solve problems. Working in IT does give you that sometimes, and the paychecks come in every month. It’s safe. But when you go three months without feeling like you’ve achieved anything worthwhile, it all gets a bit repetitive.”

‍
So he did what many people do when they’re feeling unfulfilled. ‍

He invested more time into hobbies. That meant more time in the workshop and the studio. Only this time, instead of crafting random odds and ends or shaping a new piece of furniture, he dedicated his spare time to one particular interest.

“I’m a bit obsessed with bags. I have a whole cupboard of them. I buy bags whenever I go somewhere new. The perfect bag doesn’t exist yet. My wife and sister-in-law don’t think so anyway. I’d like to make it. Maybe I’m just collecting data…”

Iterating, improving, learning all the time. After several prototypes, he arrived at an example he was happy to use himself. And when he did, people were impressed. They asked questions. Friends, family and total strangers were dying to know where James got these high quality canvas bags.

Thus, what began as a hobby began growing into something more and Houndslow Handmade was born. With a logo inspired by his own chocolate labrador, James’s new venture is a much more accurate reflection of who he is than the corporate world he left behind.
‍

“I went on and on about how uninspired I felt, but what was I doing about it? Yes there's a transitional period, but as long as you’re making small steps every day then you’re good. And I think there’s a lot of minutes in a day that you can use that maybe not everyone does.”

It helps that James is a morning person. He’s up at 3:30 most mornings, ready to work up a sweat at 4:30. By 6:00, he’s in the workshop, studio or researching and the workday begins.

But he’s not superman, nor does he claim to be.‍

“I’m up early, yes, but that’s because it works for me. I’m out by about 8:30 each night, so I’m still getting tons of sleep! It’s just about balance and doing what works for you. Just DO something, you know?”

The brand tells the story of quality, dedication and craftsmanship. Inspired by what he knows  best, the tones are earthy. Crafted from thick, quality canvas in natural tones of grey, green, brown and navy, a Houndslow Handmade bag looks and feels at home in the bush and on Bree Street.

And James reckons that recent trends mean there’s no better time to put fear to one side and start your own thing – especially given the emergence of trendy markets and online stores in South Africa.
‍

“We’re in the middle of a ‘maker’s movement’. People are moving away from massed-produced products that save the business time and money, or that exist to generate profit. It’s about the product’s story. It needs to have a real reason for being.”

He was pleasantly surprised that those closest to him were willing to invest their own money into his products. It allowed him to refine his core offering and expand his range to the several excellent examples you see today.

As soon as James felt that his products were polished enough for the general public, he set off to find a more efficient way to generate sales. Realising that selling online was a great solution led him to Wix – an established international competitor of Shopstar’s.

“I know computers. But I found Wix so complicated. Not that I couldn’t figure it out – more that I didn’t need that level of customisation. The amount of options on there...unbelievable really. I’m sure there are people that appreciate that, but I knew what I wanted and it wasn’t that.”

‍
Luckily, James had a friend that had heard of Shopstar and recommended us to him. After a few minutes he was sold.
‍

“I started my trial at 13:30 or so. By 15:30 I was up and running, pictures uploaded, store looking great, payments and shipping sorted. And I can track everything from my phone. It feels almost like an Apple product. Plus, the support I’ve received has been really good. I’m impressed.”

‍
After the initial wave of satisfaction, the overwhelming emotion was relief. James now had a reliable way to generate sales without needing a store front, a market stall or making a million phone calls. Being able to sell online took the pressure off a tough transition period, allowing him to focus on what he loves most – making world-class products with his hands from start to finish.

Or, if you’re feeling inspired by James’s story, you can start your own online store with a 14-day free trial.

The cost of running an e-commerce store in South Africa.

How to make an online store for free in South Africa

Getting started with Dropshipping in South Africa